Long lint or tufting carpet, the introduction of carpet that changed the design of decoration

Long lint or tufting carpet is named based on the type of production that is done by the method of tufting the fibers inside the carpet holding liner. This production method has made it possible to produce carpets with long fibers (up to 20 mm) in tufted carpets, unlike felt carpets. The attractive appearance of this type of carpet and the presence of a rug-like texture in it, along with its high durability and unique features of long lint carpet, has been able to direct the interior decoration of homes, offices, and even commercial centers to use this type of carpet.

Long lint carpet consists of four components: carpet lint, overlay lining, underlay lining, and adhesive. The method of producing tufting carpet is that the fibers are passed through the top lining by the needles of the tufting machine and are held by the hooks under the lining and a loop is created by turning the needles. Depending on the type of carpet, these loops may or may not have been trimmed that divide tufting carpet into three types: tufting loop, tufting cut, and tufting cut-loop, each of which carries a different sense and has slightly different properties. The tufting machine can plan the movement of the needles to create different designs and patterns on the long lint carpet. After weaving the carpet lint in the top liner, it is time to glue the bottom liner to the back of the carpet with a special adhesive. The quality of the adhesive and the used materials are among the factors that affect the strength of the tufting carpet and other issues such as the anti-allergy of the carpet. Tufting machines are used in the production of long lint carpets. Depending on the model, the tufting machine has 120 to 180 rows of needles, each needle being fed separately by a spindle, so the most common scene from a tufting carpet production line is a relatively large space filled with spindles of different colors on multi-stage shelves. Another point that may draw attention in the workshop of long lint carpet production is the large number of tubes that guide the threads from the spindles to the needles of the tufting machine.

There are several parameters that are effective in producing a quality long lint carpet. The most important parameter that can be considered is the ratio of weight to the surface of the carpet, which indicates the density of the carpet and the entanglement degree of the lint used in the carpet. Another parameter is the height of the lint in the tufting carpet, which indicates the thickness of the long lint carpet. The lint, while being high, must be resistant to hammering and not lose its shape over time. Carpet hammering occurs when the carpet lint is not sufficiently twisted in the spinning process and does not have the necessary strength. Another factor in the quality of long lint carpet or tufting is the density of the number of needles per square inch, which is referred to as the number of combs in the carpet. Naturally, the higher the needles density on the surface of the carpet, the greater the resistance of the carpet to knocking and the longer its life. 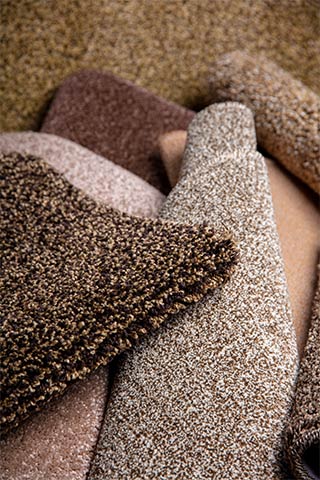 Zarif tufting also recently uses new technology in its carpets called smear-free tufting carpet. These carpets are hydrophobic, dirt does not penetrate them and they are easy to clean. Smear-free tufting carpets do not absorb dust and are not allergen for baby skin. Zarif Mossavar brand, during the years that have offered long lint carpet with the exclusive name of tufting carpet, has been able to provide the highest quality to its customers. Our faith is to turn your dream into reality.